You'll know you have stumbled upon the right tool, when you realize that you're WordPress site building takes just minutes instead of hours, and that you can deploy quality sites that are multi-optimized for SEO, Speed, marketing and ready to add content.

why we do it

save time and money

Building 'Pro-Level' Optimized And Blazing Fast WordPress sites may not always be the fun part of creating content - but try succeeding without it.

You are struggling to find time to build your next WordPress site, finding the right plugins and theme, doing on-site SEO and you may even be paying hundreds or thousands of dollars paying for it to be outsourced and done for you.
You need to spend hours to set up your site configuring plugins, optimizing for speed, SEO, adding SSL certificate and adding marketing elements for lead generation.
Use WordPress Alpha, our brand new and unique preconfigured WordPress website builder that deploys professionally optimized and lightning fast sites with a free SSL certificate in just 3 clicks!

I was building lots of WordPress niche sites

Niche sites were a great way to make money from Ad revenue and i knew how this could pay off even with not a lot of content. We had built our first site to $4000 a month just with AdSense and so we wanted to build more.

I got frustrated spending hours do the settings again and again on every new site.

To make matters worse we had a bunch of niches that we wanted to build sites for, but we couldn't build them as quickly as we would have liked.
We had plugins for SEO, security, opt-in forms, image compression, caching, backups, forms, analytics, Ad placements and more.
Plus we had found a combination of plugins that worked well together and didn't slow down or disrupt the sites, but our setup was costing us time, holding us back and slowing us down.

After trying some outsource assistants, some great, some not so reliable things did improve, but i found i spent as much time explaining tasks to them as i was working on my own tasks, plus it was costing money.
I wished there was a tool that would allow me to just clone sites, directly onto a blazing fast server and ready to start adding content.

In short, we built the ultimate WordPress website builder for 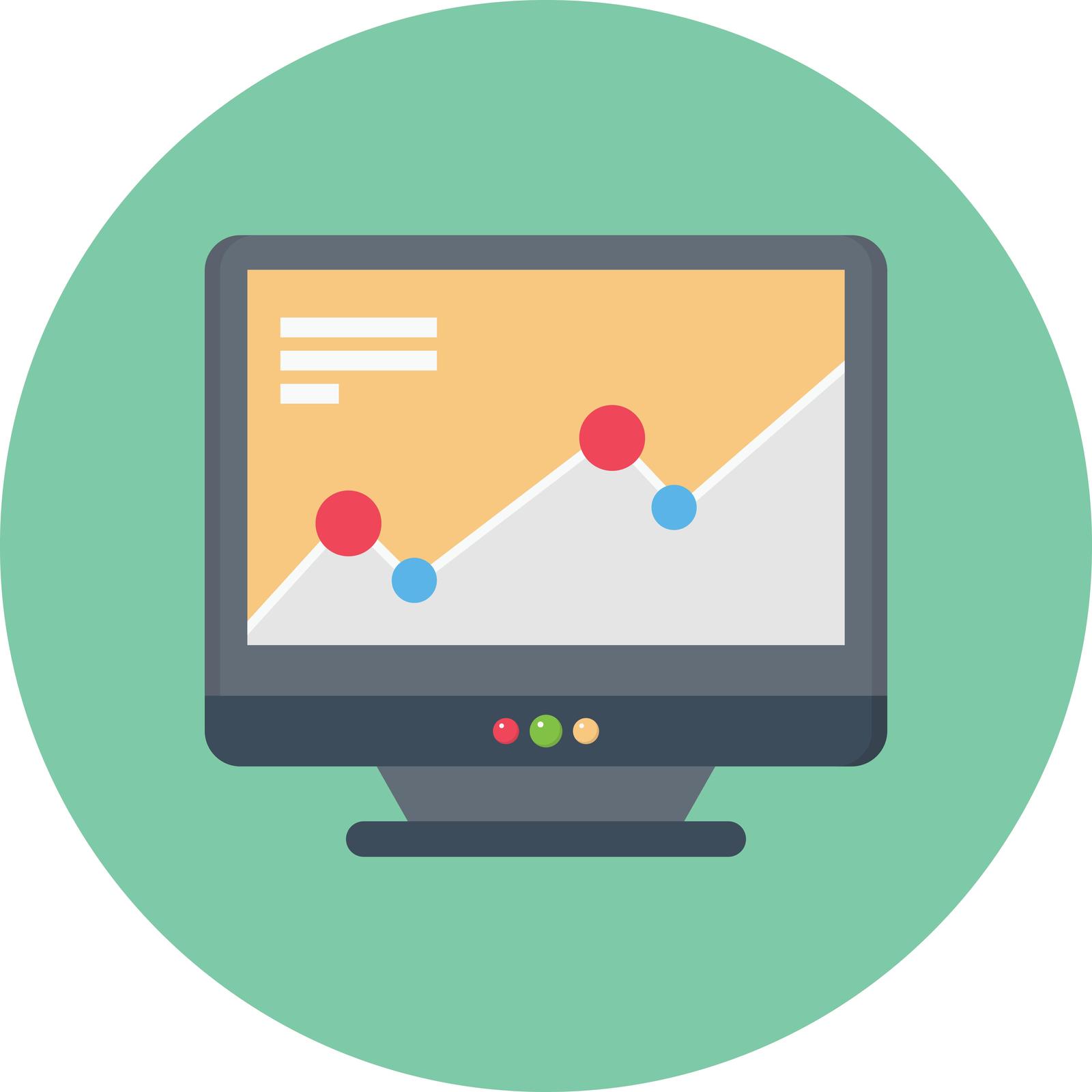 Deploy WordPress sites in just 3-clicks with plugins and themes installed and configured for you, Saving hours of work and ready to start adding your content. 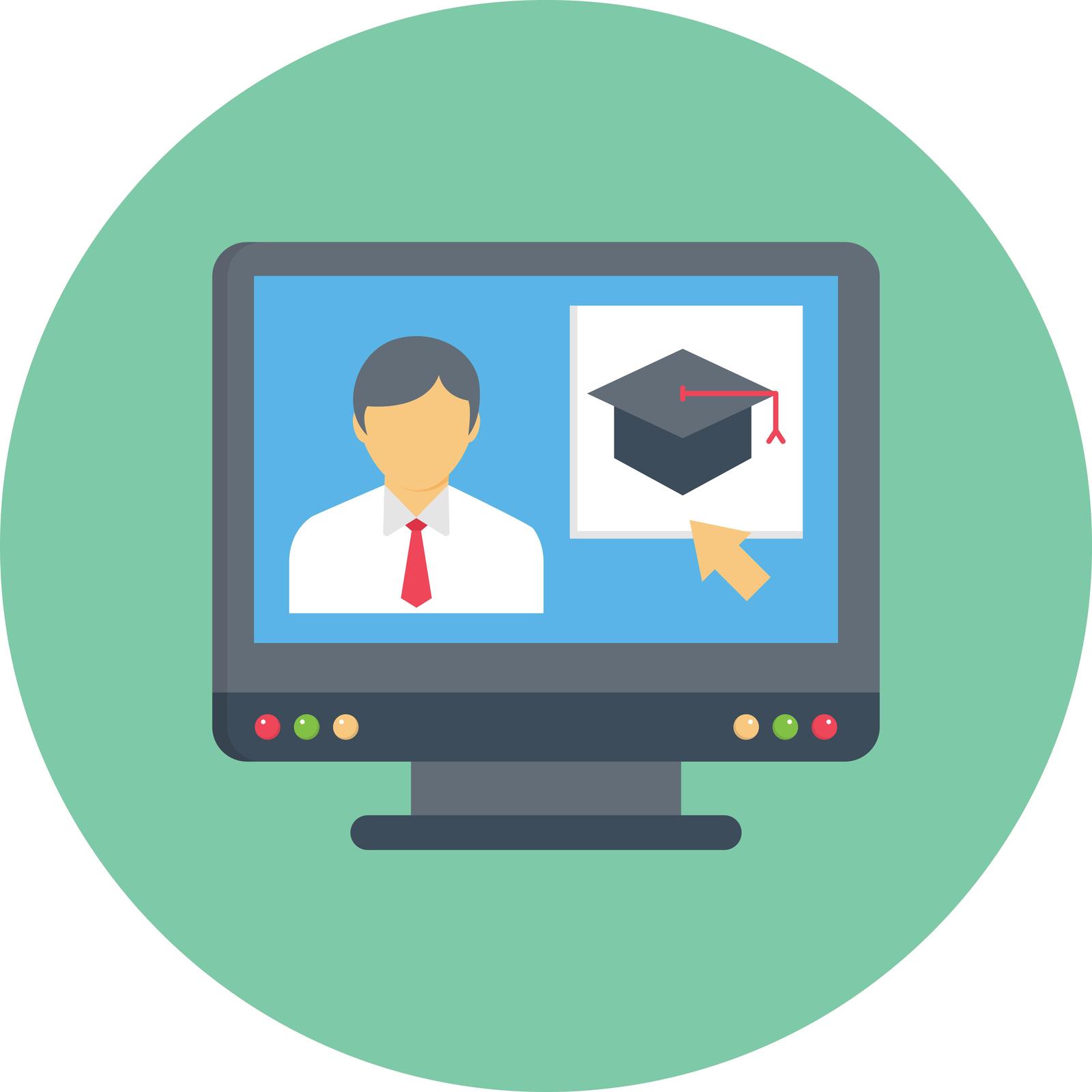 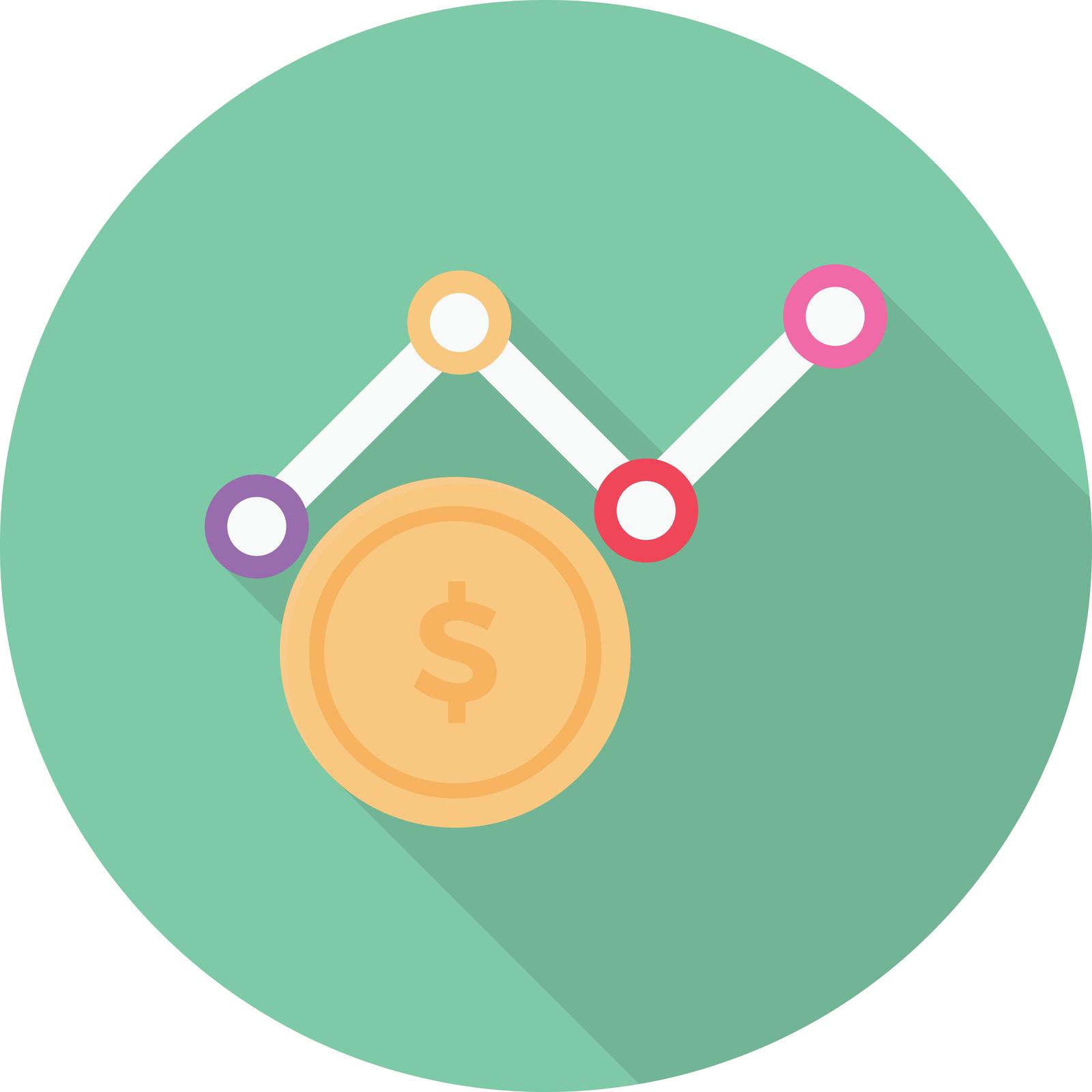 Keep More Of Your Money

As well as saving time, WordPress Alpha also saves you money paying outsourcers hundreds or thousands of dollars to build your WordPress website for you. 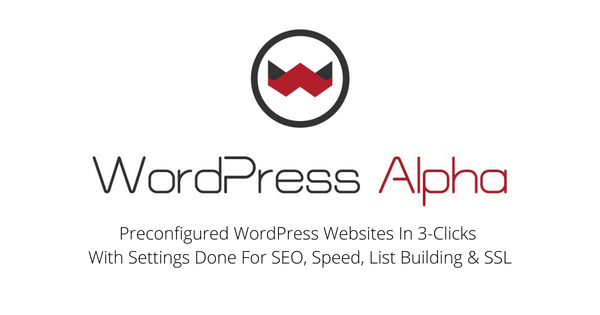 Who Else Wants To Speed Up Their Business With The Best WordPress Website Builder On The Market? 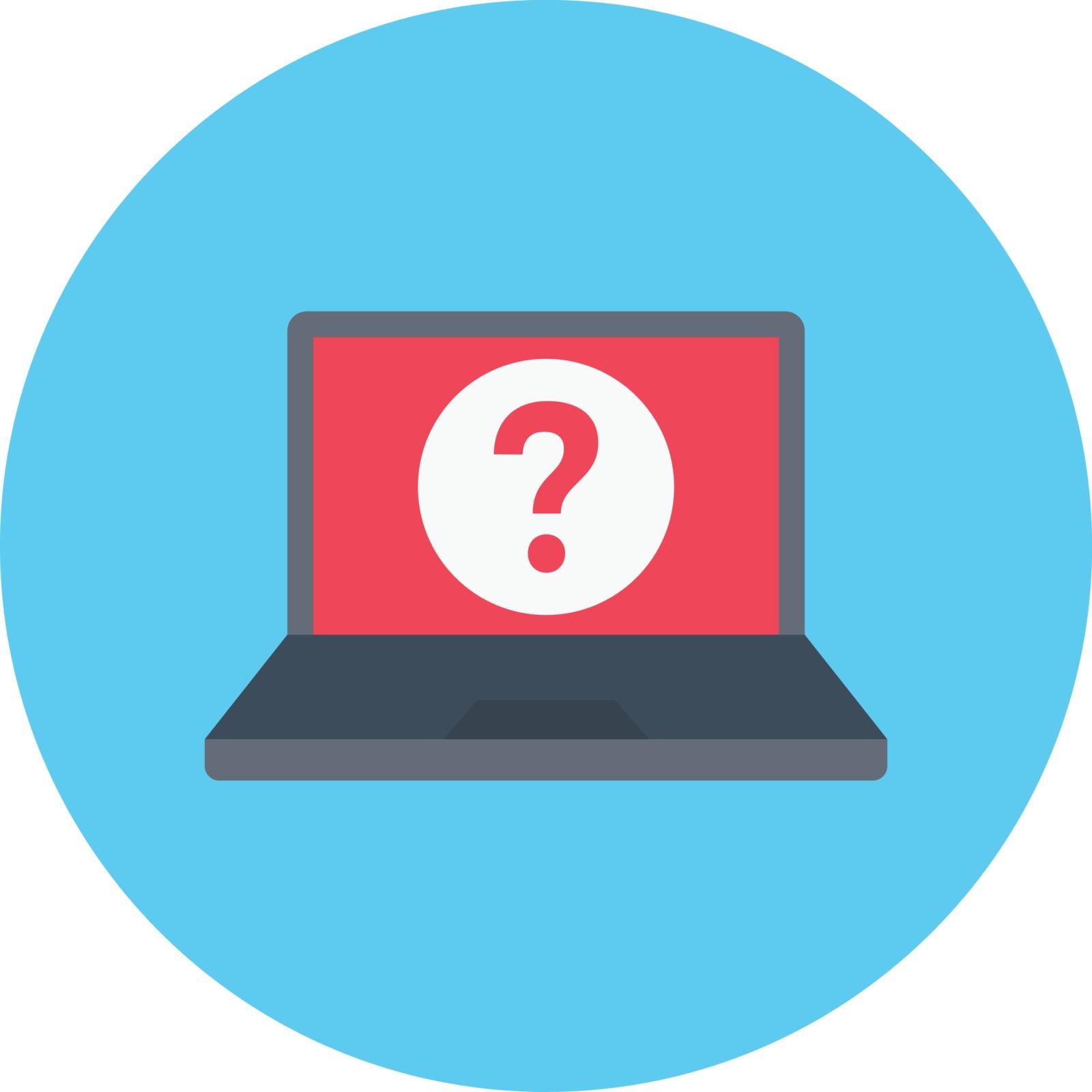 It literally takes just three steps. 1. Add your domain name and URL and click submit.
2. It takes about 3 minutes then you are provided the IP to add an A record into Namecheap or Godaddy (or your preferred  domain registrar)
3. Once your site is propagated you click to install the SSL certificate. 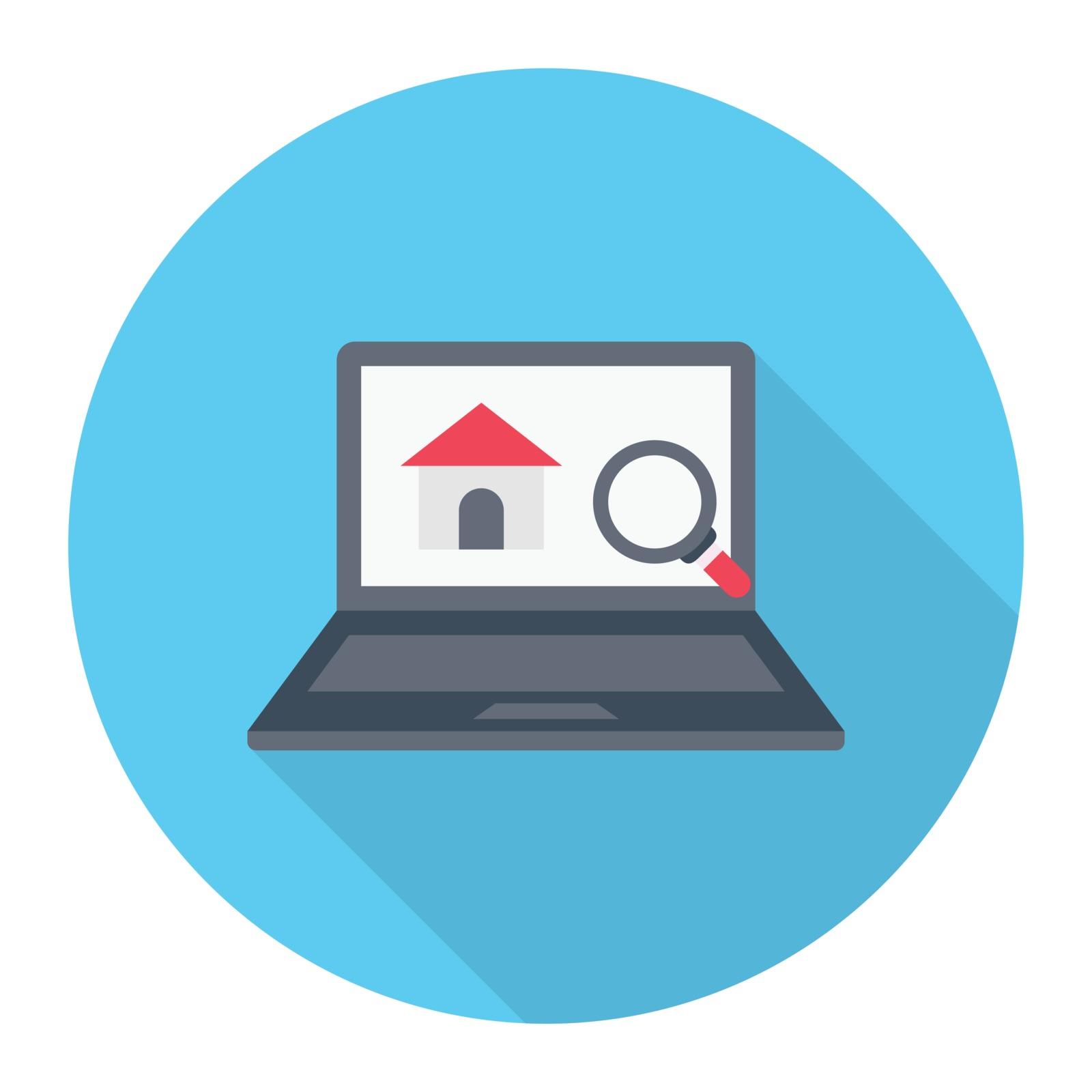 There still some personalization to be done once your site is live such as your site title and meta description and integrate with Google analytics and Google search console which is done in a few clicks with a plugin.
After that you can remove any plugins you don't want, add your own premium plugins and start adding content. 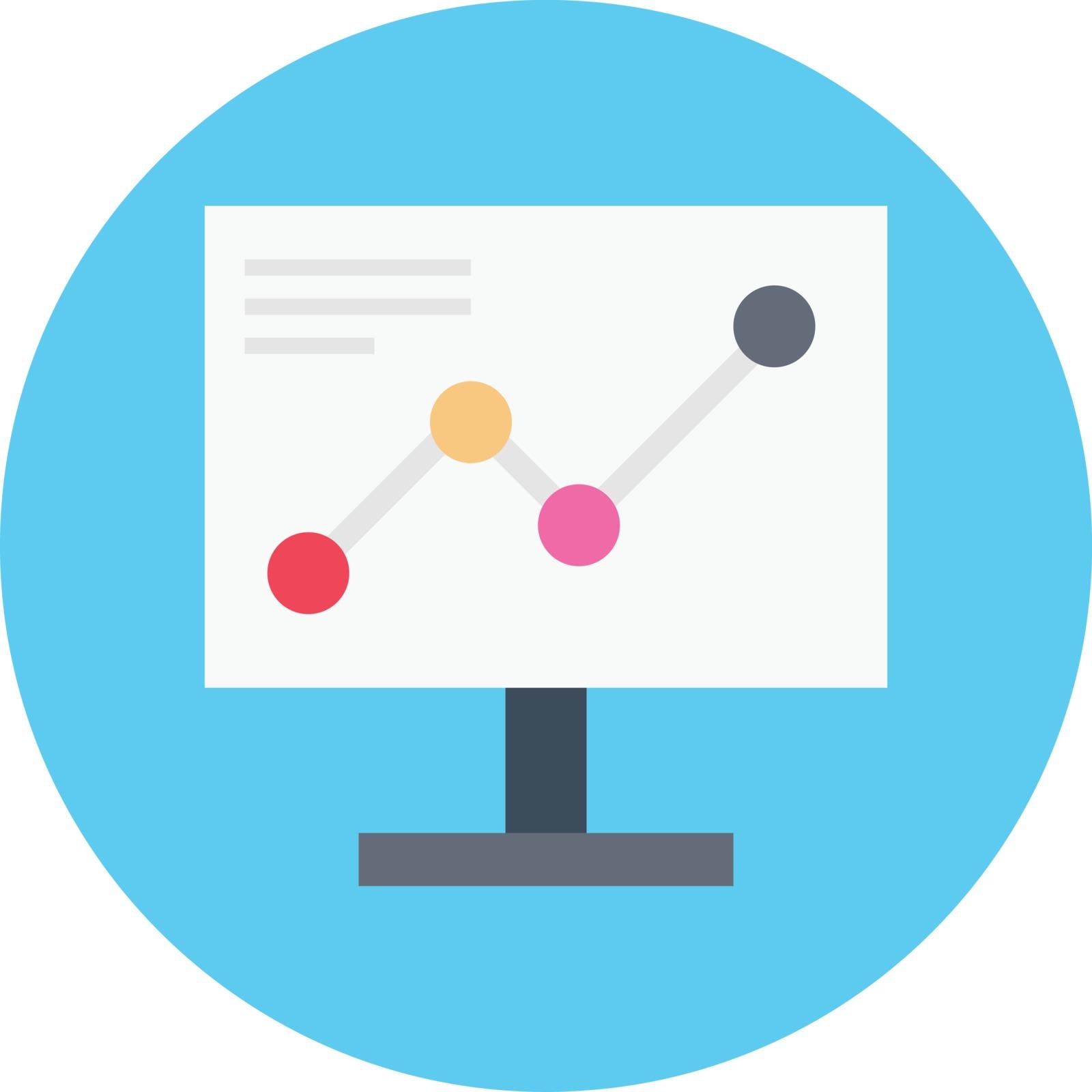 Get To Monetization Faster

Whether you are starting a new blog, building an affiliate website based around a single product you are promoting, building a portfolio of niche sites, launching your own products, or an agency building and selling WordPress web design to clients then this will significantly speed up your journey to get to monetization. 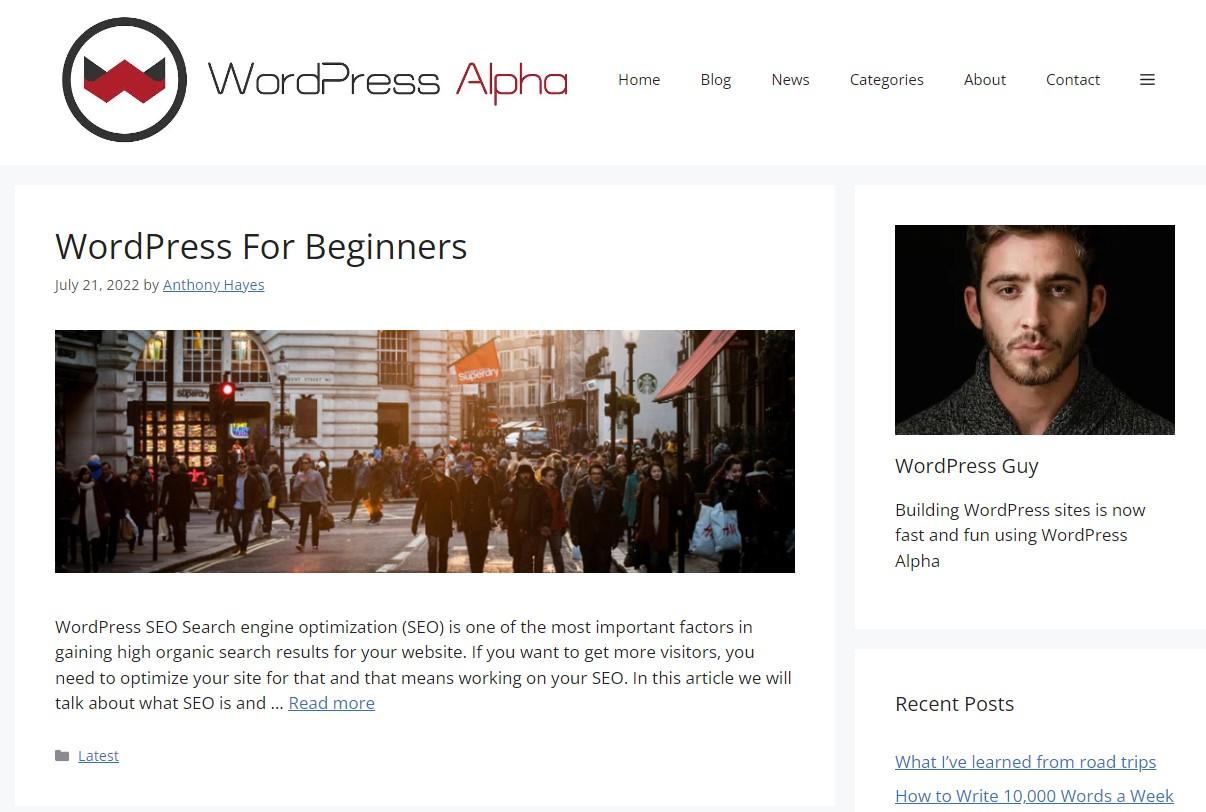 This is Much More Than WordPress Website Builder Tool, It's a Multi-Optimized Preconfigured Marketing & Money Saving Software Designed To Help You 'Move The Needle' and Get To List Building & Monetization Faster.

The main feature of WordPress Alpha is the preconfigured templates.
Here's what we have now and what's to come.

deployed in 3-clicks & live in minutes

The speed of deployment is a major highlight of WordPress Alpha website builder. It literally is three steps to deploying your website and the chosen template will be live on the server within minutes.

The preconfigured plugins are the engine of your new site.

We have plugins with settings done for most plugins that cover essential functionality including:

There are many great WordPress themes out there, however we have chosen to work with one main theme which is Generate Press. This is a light, fast and clean looking as well as easy to optimize for SEO and speed.

You can change to your own preferred them if you choose, and add your own plugins as with any other WordPress site.

WordPress Alpha currently integrates with Digital Ocean and we are working to add Cloudways.

These are very fast hosting solutions for WordPress sites.

A server (or droplet as they are called on Digital Ocean) for one site costs $5 per month.

This is higher cost than hosting like Bluehost or HostGator but i found those hosting solutions to be slow and have had them crash when there was heavy traffic on the site.
The quality of your hosting is crucial for SEO, User experience and Digital Ocean is an affordable, high quality option for hoisting WordPress sites while maintaining speed and its easily scaled up when needed.

When you have too many plugins and themes on WordPress it can becomes slow, this gets even worse when using a lower quality hosting service. WordPress Alpha is built with a blend of essential plugins that do not conflict with each other, and with the sites deployed on high quality hosting we have the ability to maintain the speed.
The plugin configurations for image compression, Gzip and Caching takes care of the ongoing site speed as you start adding more content and driving more traffic.

One of the biggest issues facing WordPress users today is the need to use SSL certificates. The reason its an issue is because there are often too many steps and uncertainty what certificate option to purchase or where to get them free and then how to install the certificate properly.
That has been taken care of with our unique one click solution that installs the SSL certificate for you.

Optimizing WordPress sites for SEO includes site speed, being mobile friendly, integration with Google search console and Google analytics and many more small but important tasks which are typically done with SEO plugins like Rank Math, Yoast and All In One SEO.

We have all 3 installed with most of the settings done.
You can choose the one you want to work with and delete the other two.

Having saved hours of work getting a professionally preconfigured site set up, you can focus on content and driving traffic instead of hundreds of small but important tasks that WordPress Alpha has taken care of for you. 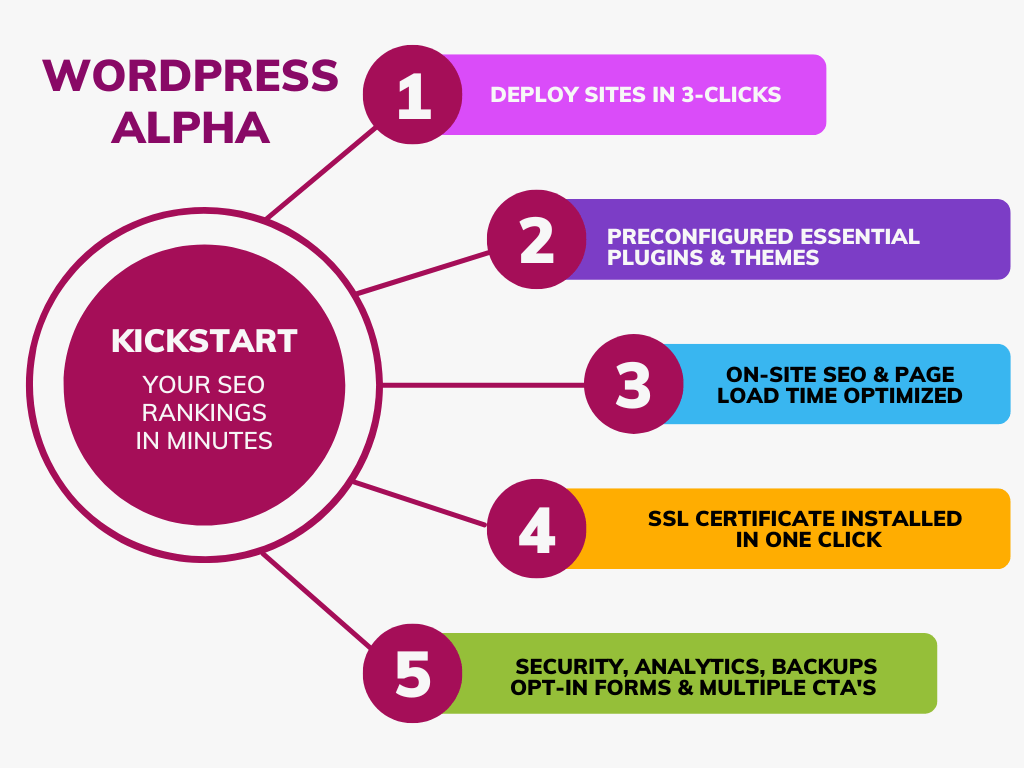 Sure, you can find less cost Gigs on Fiverr but you typically get what you pay for there

With WordPress Alpha your site can be deployed, preconfigured, optimized, on blazing fast hosting all within minutes. No waiting, and no where near the cost of hiring WordPress website building services, that often do not come with plugin configurations, SEO, Page Speed optimization, opt-in forms, security, backups, SSL certificate installed and more!

Do i need to buy anything else to use WordPress Alpha?

You need to pay for hosting, currently we deploy sites into Digital Ocean droplets (servers) which cost $5 per month but give you blazing fast sites and the server resources can be expanded easily as your traffic grows.

Can i add my own premium themes and plugins?

Yes, you can add themes, plugins and change things as you would do with any other WordPress site.

What hosting options do i have with WordPress Alpha?

Currently, we are working to integrate with Cloudways which gives access to hosting on Vultr, Digital Ocean and Linode with managed security, automated Backups, 24/7 Real-Time Monitoring, All PHP Apps Supported.
They also support multi-site servers from around $12 a month.
Cloudways works really well for WordPress and includes WordPress server caching and even a free WordPress optimization plugin.
This is lighting fast, high quality hosting.
We tried previously with lower cost hosting with Bluehost, but the performance was slow, and we have removed it from WordPress Alpha.

Can i buy one site install licenses as and when i need?

Yes you can.
If you do not intent to build many sites you can purchase a single site license which is much less cost and faster than paying for a fiverr gig which may, or may not give you the same quality.

Will you be building WordPress funnels templates?

Does WordPress Alpha integrate with Cloudflare?

Yes, you can add an 'a record' into cloudflare instead of your domain registrar to use the cloudflare DNS.

If you're looking for an easy to operate tool That Helps You To Focus On Content without having to spend time or money Building And Optimizing WordPress Websites, that won't cost you hundreds (or thousands) of dollars per year, then this is for you...

So, Who Is This For?

Anybody who falls into one of these categories:

Did any of those describe you?

If it did, then you can speed up your site building today.

Here we have a highly attractive offer for you and you need to make a decision right now if you want to take advantage of the founder members offer.
WordPress Alpha will not be at this price for very long, jump in now and lock in your special discount.

Take Advantage Of The Early Bird Launch Pricing Below 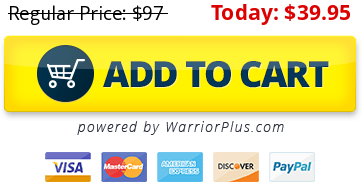 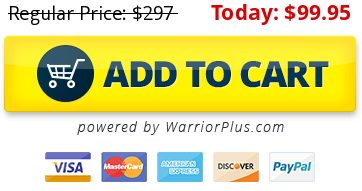 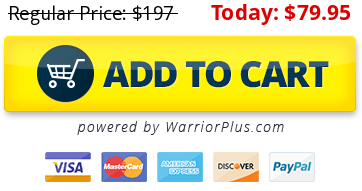 No thanks, I don't want this offer.